Ever wonder why we have flags? What is its significance to the nation it represents? Why have a state flag when you have the country flag? Confusing. A state flag differs in detail from a national flag. That is to say, that the design is more detailed and complicated because it must bespeak specifically of the state’s accomplishments and convictions rather than the country’s. Usually, a state flag is considered as a government flag so to recognize its council and agency. But more often, in other countries, the state flag is almost the same as a national or country flag.

Yet, here, we speak of the North Carolina State Flag. And what does it really do to a state?

The flag from the state of NC shall consist of a blue union, containing in the center thereof a white star with the letter “N” in gilt on the left and the letter “C” in gilt on the right of said star, the circle containing the same to be one third the width of said union. The fly of the NC flag shall consist of two equally in size bars with the upper bar red-colored and the lower bar white-colored; the length of the horizontal bars shall be equal to the perpendicular length of the union, and the total length of the flag shall be one half more than its width. Above the white star in the middle of the center of the union there shall be a gilt scroll in a semicircular form, containing in black letters this inscription: “May 20th, 1775” and below the star, there shall be a similar scroll containing in black letters the inscription: “April 12th, 1776”. (1885, c. 291; Rev., s. 5321; C.S., s. 7535; 1991, c. 361, s. 1.) 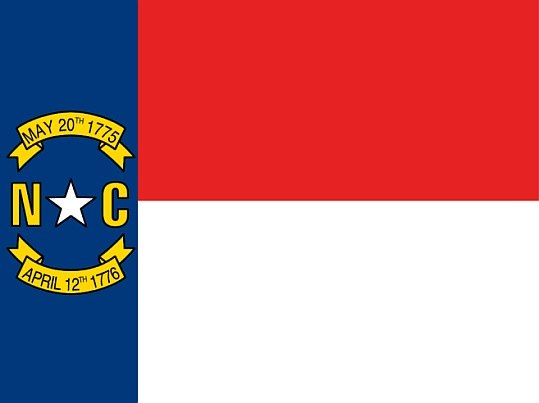 Red and blue, of shades as adopted and appearing in the North Carolina State Flag and the American flag, shall be, and hereby are, declared to be the official State colors for the State of North Carolina.

Significantly, a state flag separates each state from one another aside from the country flag. It makes the state stand on its own and proclaims independence from other states. A state flag doesn’t only symbolize the nation per se but actually summarizes the oneness of the people living in it and exhibits the belief of the state people. Moreover, a flag represents strength and unity, spirit and patriotism. Going back to the origin of how flags came about, we shall trace it back to ancient times. It was believed to be a symbol of command, respect, and reverence. People during the old times also believed that flags are divine and carry strange, mysterious and supernatural powers.

Of course nowadays, the world has adopted similarly to that belief, and as seen, every country has its own flag. This, in turn, shall be points we have to consider now that we are actually faced with the truth behind the creation of these flags. Because it symbolizes unity in general, we must not forget that our flag deserves respect as it is a tangible representation of our nation. No matter what it is – country or state flag- the colors and images have meanings and therefore, be reminded that we are not here without the histories that our nation went through and the flags would not be there if hardships and victories didn’t occur.