The Great Seal of the State of North Carolina

A state seal is similar to a state flag but they differ in some documentary ways. A flag is a symbol of unity and strength as a nation that can be seen practically everywhere and a seal is more commonly used on paper, on very important papers, as a label. The seal of North Carolina had numerous procedures before it had been finalized. It was the governor’s duty to file in the office to file in the Secretary of the State an impression of the great seal. It will be certified by under the governor’s hand and will be attested by the Secretary of the State. Sounds pretty easy to follow but the seal went through many revisions before it had been approved.

When the seal is done, it shall be carefully preserved by the Secretary of the States. End. It was not an easy task. The government had many requirements and the impression was difficult to make. Below are the detailed requirements for the Governor’s duties in obtaining the great seal: 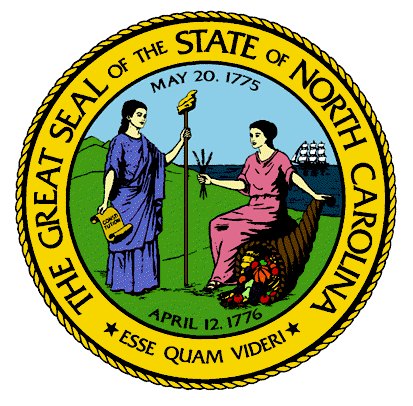 The Governor shall procure of the State a Seal, which shall be called the great seal of the State of North Carolina, and shall be two and one-quarter inches in diameter and its design shall be a representation of the figures of Liberty and Plenty, looking toward each other, but not more than half-fronting each other and other-wise disposed as follows: Liberty, the first figure, standing, her pole with a cap on it in her left hand and a scroll with the word “Constitution” inscribed thereon in her right hand. Plenty, the second figure, sitting down, her right arm half extended toward Liberty, three heads of grain in her right hand, and in her left, the small end of her horn, the mouth of which is resting at her feet, and the contents of the horn rolling out.

Those directions are on paper, shall be followed accordingly and must come up with a completely similar blueprint according to the descriptions. And don’t forget the state motto, “Esse Quam Videri”, it is also indicated in it. So much to say of the Great Seal of North Carolina but this has to be of some worth. The flag deserves respect and a seal’s meaning must be understood. That is the difference.